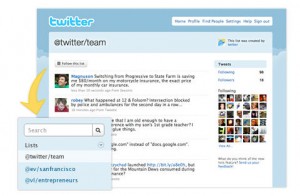 Twitter now let's you organize your favorite tweeters into lists. A very handy way to add some order to the tweet chaos.

The new “list” feature on Twitter is fantastic!  Basically, twitter follow lists lets you the user organize your twitter friends into meaningful lists to share with others.  This morning I started organizing various lists relating to mobile technology that I thought would be of interest to others.  So far, I’ve put together the following lists:

This is still very much work in progress, but if you’re a mobile junkie, eavesdropping on these lists should help you very quickly tune into the tweets that matter.   I’ll be adding some addition mobile-related categories in the future.  If you find this useful, a  retweet would be greatly appreciated!